Last Friday(04/27) a few co-workers and I were reviewing the RailsConf 2013 program and I found that it was very hard to see the schedule on my phone's small screen. When I tried to create a calendar of the talks I wanted to attend, I noticed that it wasn't possible.

The RailsConf site has a fixed width, so it's not easy to read on the small screen, so I thought - "there has to be an app for this". First I thought that I should contact the RailsConf organizers and make my request, then just sit and wait for the answer. That probably would have been easier, but then I thought to myself: "Wait a minute!, I'm a web developer, I build applications everyday, I write code, I know how to do it, I know how to write responsive CSS". So I decided to build this app.

Building the app sounds like a straightforward process, but it has a couple of complications, starting with the fact that I didn't have the program data, I tried inspecting the RailsConf Site's code looking for a JSON call or something similar, but I found nothing. I started to worry about it, because I really wanted to do this, but without the data it would be useless. Then one of my friends said joking: "you could perform a screen scrapping". That's a crazy idea; but it might work, I thought.

Then I remembered a post about screen scrapping so I went to Eduardo and asked him to do the scrapping and to provide me of a JSON with the data, which he did in a few minutes.

So now I have the JSON, and I just need to write the app to show the data.

I was there, creating my rails new and I really wanted to make something useful for me and everybody, and also to make it look good. I'm tired of Twitter's Bootstrap, 'cause now the internet looks all the same; so I found this new front-end framework which came very handy Gumby 2. It's really simple to use and it's written in Sass, which I love.

I wrote this is app this past Saturday and between Airports and Airplanes, fixed a couple of bugs during my trip to Portland, OR.

Stop talking and show me the app! 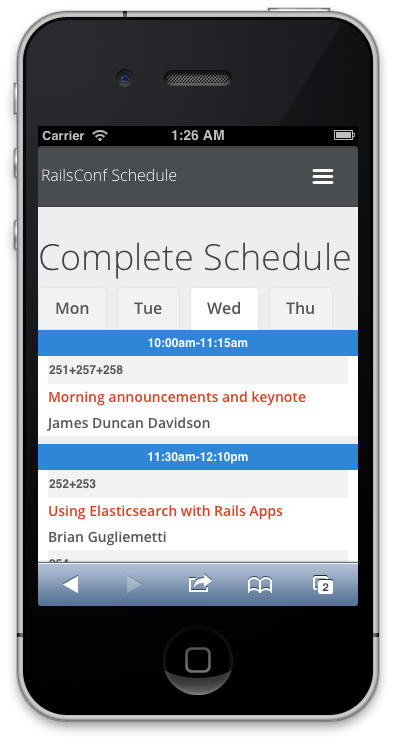 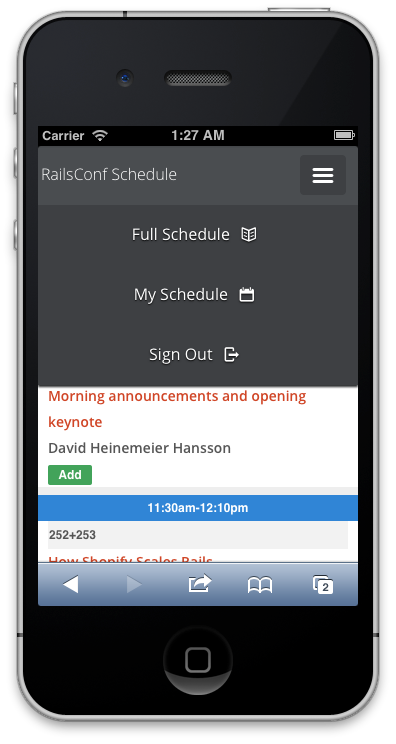 RailsConf now has an app, is it worth it?

It's totally worth it, I've build and app in just a day, I'm using it for managing my own schedule, and I have some pull request from a couple of friends who would like to help to make this better. And It was really fun.

No matter if you think that the app is good or not, contribute to make it better! Fork the repo, hack a little bit and make it better!. Submit your pull request and help us with this project.

If you have never performed a pull request, I highly encourage you to go for this one, you could continue helping other projects after this, and the community will be thankful. It doesn't matter if you only fix a typo, or a security loophole... just go ahead and contribute.

Yo can find the code at https://github.com/hecbuma/railsconf/

If you identify a problem, and you have the tools and knowledge to solve it, go ahead and fix it!. You will be helping everyone. You may think that the problem is too simple to merit your contribution, but your work could be a lifesaver to the rest of us.

I hope you enjoy this app!

Being a remote developer and not die trying

Ruby Language: Why We Have To Use It?