The feminine touch in tech, part 1

A few days ago, my MagmaLabs colleagues and I had the opportunity of traveling to San Francisco to attend GoGaRuCo 2013.

Being part of this event was a great experience, since it was my first tech conference abroad . I'm not here to tell you about it; of course that it will be the subject of another blog post. But instead, I'd like to tell you about the amazing time we had there visiting some companies and meeting some extraordinary women of the SF tech scene who are breaking through a men-dominated field and working to promote the culture of inclusion and minority participation in the tech community.

I wrote all this as part of our celebration of the Ada Lovelace Day. It's a large post, so I decided to split it in two, in order to prevent leaving out important details.

During the week after GoGaRuCo, we had meetings with engineers, designers and developers who gently invited us to visit their offices, and in some cases, having a cup of tea or coffee at some beautiful San Francisco venue. We even met people by skype calls.

The first day we visited ModCloth offices in order to talk to Mariana Hernández, a mexican software developer who has been living in San Francisco for almost two years. Although the ModCloth's target are mainly women, there's only just a few female engineers working there. She works with Ruby on Rails and she's also an active member of the tech community in that city, taking part in events like RailsBridge, Women Who Code. Also, she's a founding member of the Codificadas group (which is based in Colima, Mx). Mariana is doing a great job outside her country, and showing that she can face any challenge. Her advice: "Read and practice a lot. Be curious. Don't be afraid of choosing computer related careers just because there's a lot of men. We need diversity."

On our second day of visits, we had an appointment with Ana Martínez at Zendesk, and being there we talked to her and two more engineers, Anna and Stephany. They talked to us about their jobs, their challenges as female engineers and how they want to improve their careers. Also they showed us the way they've been able to standout despite some difficult male-centered environments. It's not that the company focuses only on males, but as we understood, it is a cultural thing (even more evident in Mexico, by the way).

We loved this visit because the supportive environment they have and of course, the beautiful spaces of their offices. Their advice: "Don't be shy. Ask questions, be critical. Learn to defend yourself, to say no."

It's noteworthy that Ana Martínez is also a Mexican software developer, and she found her way in San Francisco's tech industry thanks to her hard work and perseverance.

Same day at night, we attended a Women Who Code meetup at Indiegogo HQ, and it was great to be there, because this group was our inspiration to create our Codificadas group here in Mexico.

We had the chance to met some of the organizers like Zassmin Montes de Oca, Alaina Percival, Sowjanya Mudunuri and Georgia Andrews. Also we had the chance to present ourselves in front of the attendants as the Mexican Women Who Code chapter, and got a chance to talk to them about our work with the female mexican developers. Of course, we could not leave San Francisco without being in a WWC meetup. 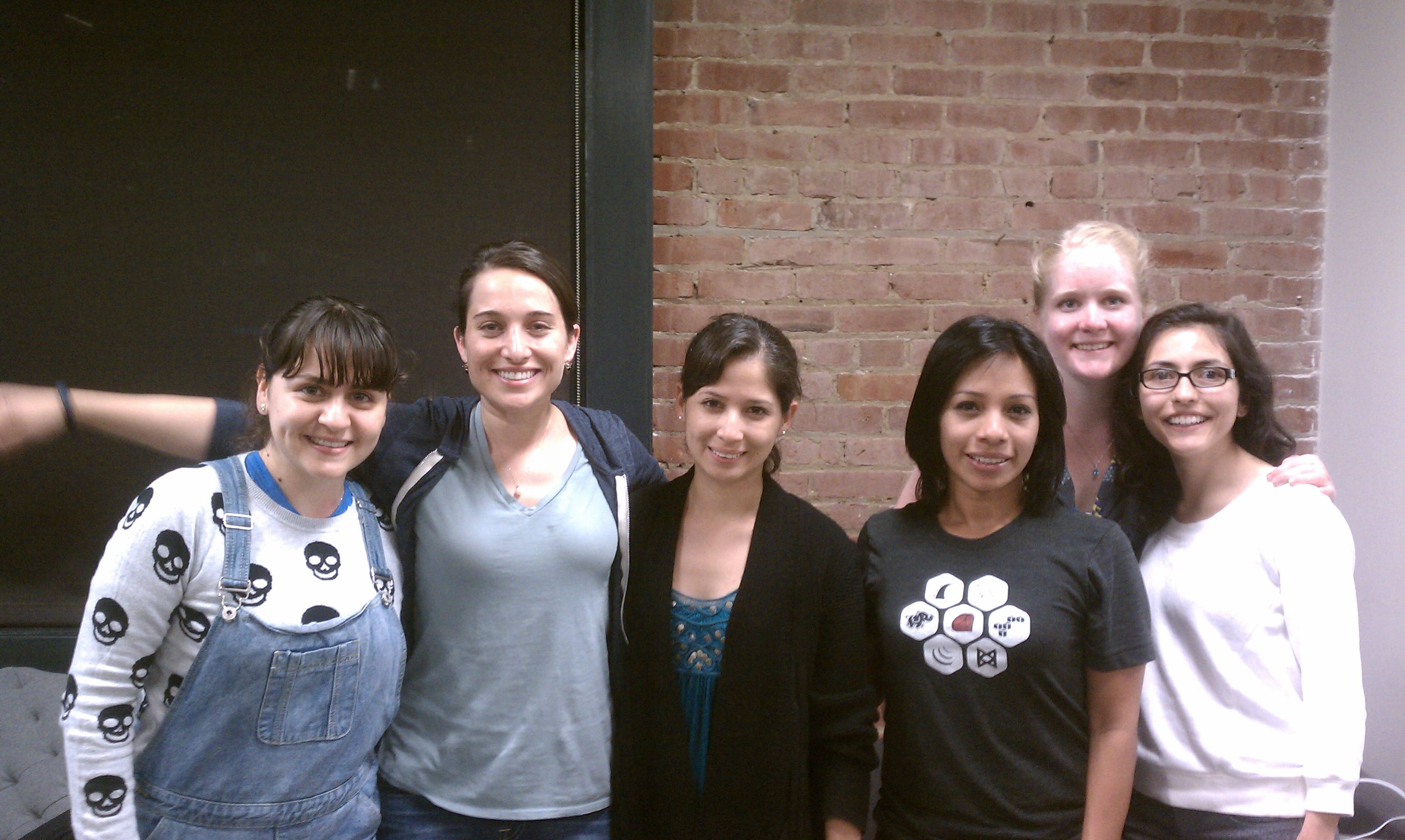 Next day we met two of the most iconic females in tech industry: Sarah Mei and Sarah Allen. In separate meetings, they talked to us about their amazing working experience, their contribution to the RailsBridge movement and how they've succeeded running their own companies, without neglecting their family life.

Sarah Mei talked to us about how she started in tech and a little bit about her experience working at Pivotal Labs and Microsoft. Also the challenges she has faced in terms of communication when building products, and how women have to deal with expectations about their work. From her own words: "I have to do things better than the men around me in order to be taken seriously at all". She's now running her own company, Ministry of Velocity, a San Francisco-based software consultancy.

When talking with Sarah Allen, Blazing Cloud's founder, she told us about her work with large developers teams, and how she divides her work between being a developer and being a manager.

She's one of the most well-known females in the tech industry, and one of her biggest challenges was to break through the tech field without a female role model, mentor or even a women community like nowadays. Also she told us about how she overcame their frustrations and self-doubts about being a woman in computer field.

Sarah Allen's advice: "I think is important to learn a programming language really, really well, and when you're a new coder, is good to be solid at something, to learn something that experienced people don't know really well."

At this point, we were full of inspiration and enthusiasm, because besides their amazing work and knowledge, all of them are really kind and cool people, and they were as happy as us of being there talking about their lives.

I have more great stories to share about that week in San Francisco, but that will be material for a second post. It will be published soon, so stay tuned! If you have questions, please go ahead and post them below.