The feminine touch in tech, part 2

Continuing with our celebration of woman in tech, I want to share with you more of our related stories from San Francisco.

After three days of meetings and great talks, there was still more going on for us.

Thursday afternoon we had a meeting with Rachel Myers at Github. Rachel works there as a software engineer, and she's also an active RailsBridge member. We spent the whole afternoon at Github, and we can say that it's an amazing place to work. Zassmin Montes de Oca from Women Who Code also joined us that day. Rachel and Zassmin talked to us about how they decided to become coders and how they love to solve problems through code, dive into the details of how an applications works.

In the past, both of them faced difficulties for being females, but they agree that things are changing nowadays.

Rachel and Zassmin are doing an impressive work in order to promote women participation in software development. They are definitely our role models. And their advice is: "If you really like something, understand the foundations and do your own research. You can learn things by yourself. Learn things beyond what you learn in school."

And, regarding RailsBridge, Rachel told us that the main motivation of this workshop is to create a safe environment for women to learn with plenty of freedom to ask anything without making them feel stupid or intimidated. 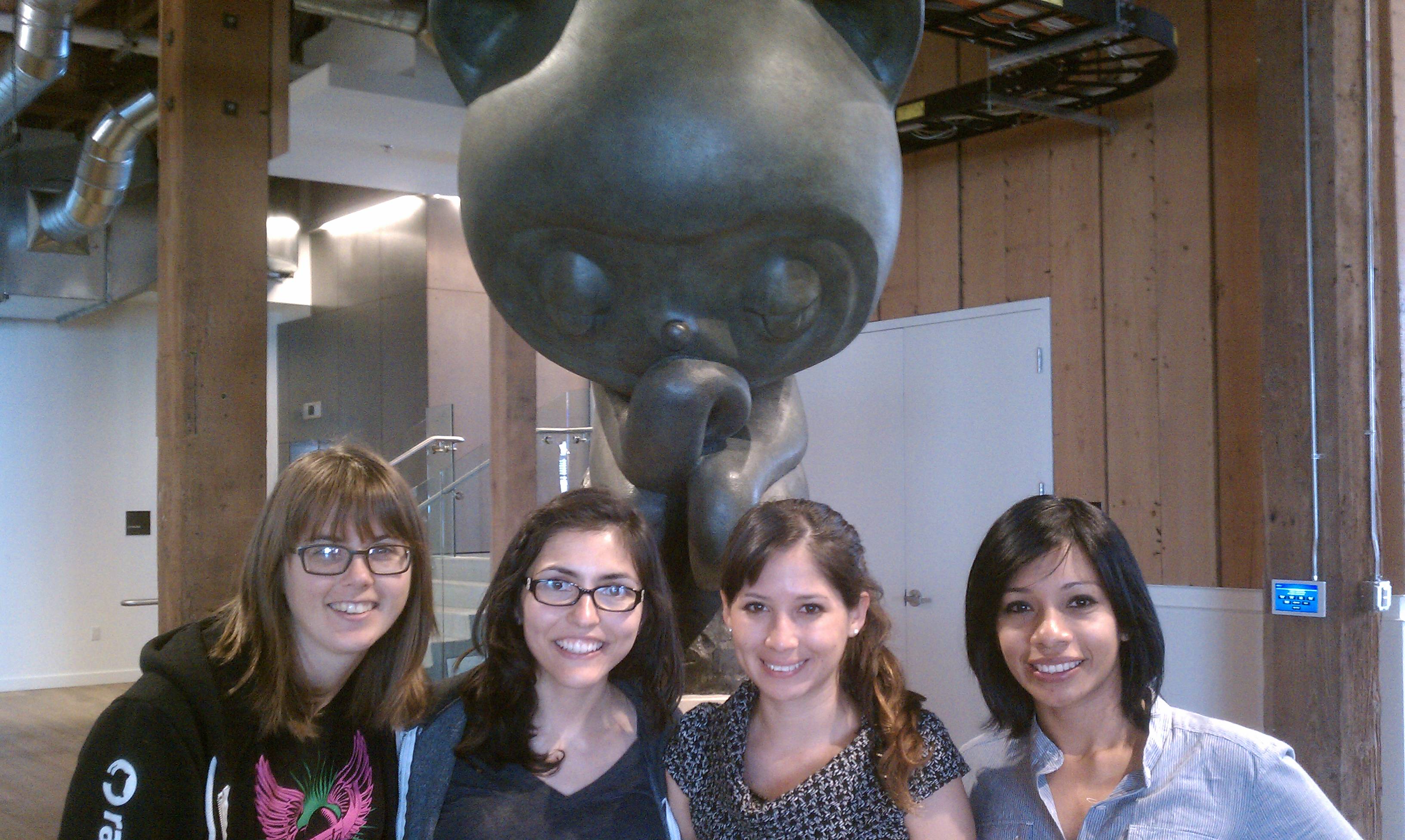 Same day at night, we attended a Passion Project talk also at Github. Leslie Bradshaw talked that night about how challenging it was to start her own company when she was only 24. Her advice: "Get rid of the people who don't make you a better person. Do what you love, and put family first." It was an inspiring talk!

Next day, we had a very busy schedule. Early in the morning we had a delicious breakfast at Pivotal Labs. We met Elisabeth Hendrikson, who gave us a tour of their offices and talked to us about their work with Cloud Foundry and with Robot Framework.

Elisabeth told us that her father was very supportive about her learning how to use a computer and programming. Also how she had to deal with sexist comments and male environments at school when she was a student.

She's glad that things are getting better now, but still there's a lot of work to do. People still assume that if a girl is using their company t-shirt is because she's from marketing. It's still difficult for people to think that there are women involved in the technical areas of the company.

Elisabeth's advice for female engineers: "Keep going and have faith in yourself, and know that you are as smart as anybody else around. Don't discount your successes. Don't undermine yourself. We all are in the same level, so never discount your contributions."

Later, at noon, we had lunch at Thouthbot offices. We had the chance to meet some of the developers and also we attended a talk about Go right there.

While we were at Thoughtbot, we had the chance to talk with Diana Zmuda and Jessie A. Young. Both of them are also involved with Women Who Code and RailsBridge. They talked about Toughtbot's apprentice program, and how it makes the environment pretty comfortable to talk about technical topics and ask questions to more experienced people. They have a great culture of teaching and mentoring. Also, they have a strong female presence in the company.

Their advice: "Anyone can learn to program, it's not that difficult. It's just a matter of sticking with it and making sure you don't give up on yourself. Don't think that you can't do it". 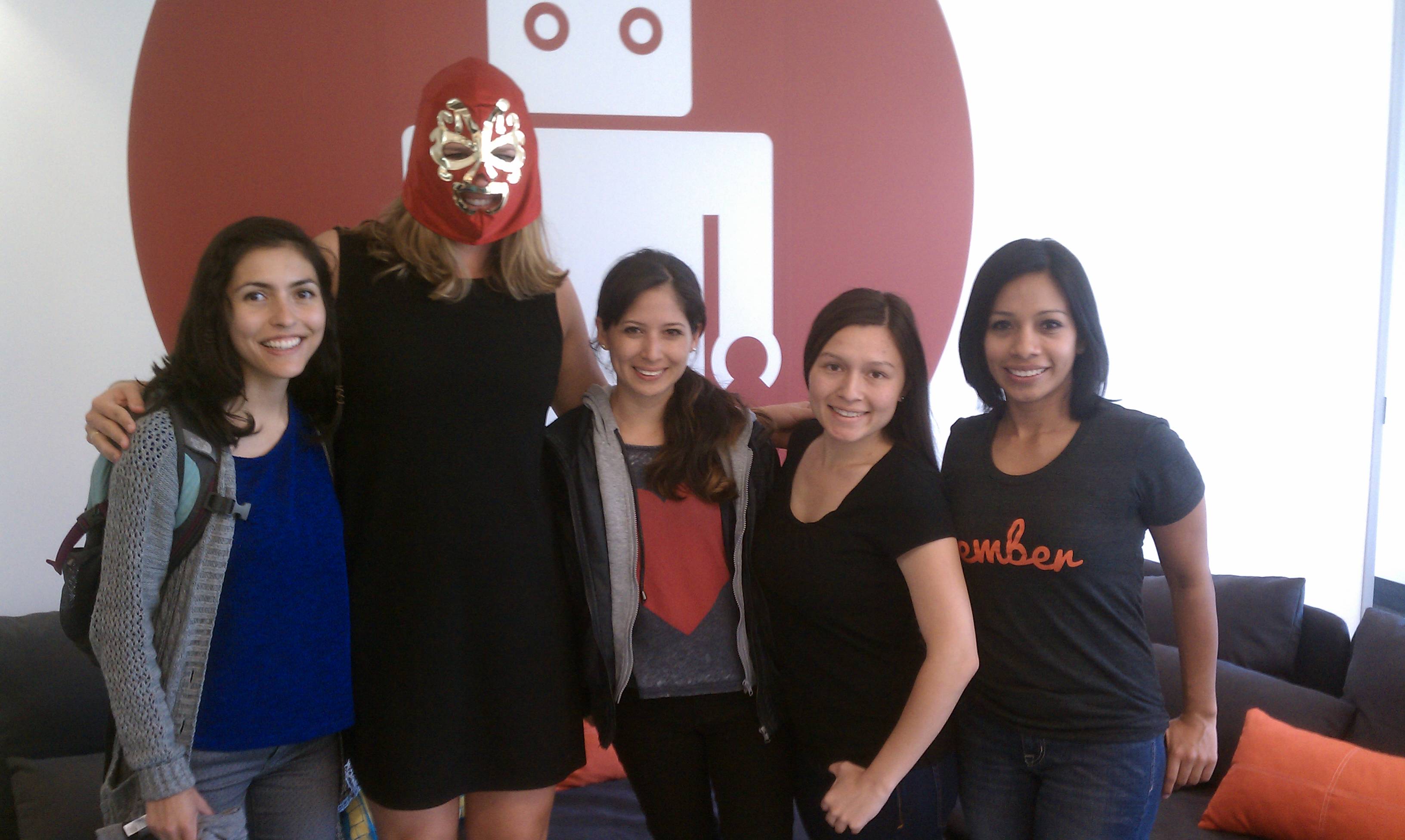 Later, that afternoon we went to a coffee shop to meet Carina C. Zona, a freelance software developer.

Talking with Carina was really inspiring because of her work of promoting women to speak at conferences. She talked to us about how she started to program, and how her curiosity and self-learning brought her to where she is now.

Learning Rails was difficult for her because of the lack of learning resources and people doing it some years ago, there wasn't even a community. Learning another languages or frameworks was so much easy. But later on, she fell in love with Ruby and Ruby on Rails.

She's also faced difficulties because of being a woman in tech, because some people are still not used to interact with female developers.

Carina is doing a great job in order to bring more women to conferences, as attendants and as a speakers. Actually, talking to her was my inspiration to make my first talk proposal for MagmaConf 2014.

That night, we had dinner with Marcela Benitez. She's Head of Support at Duolingo. It was great to met her in person, since she's also a mexican woman working in San Francisco.

Although she's not a software developer, she works with the community and that's how she's connected with the technical field.

One of the most difficult challenges for her is the fact that women have to work more in order to be noticed and taken into account. The point that women have to work even more than men to show their knowledge and that they're are capable of doing their job was becoming a constant, and this case was not the exception. Marssy, as she likes to be called, told us that sometimes some people try to take advantage of their physical or appearance to get a better position or salary. And that's also a problem nowadays, because we don't just compete with men, but also with other women who might not be so well prepared for a position, but take advantage of their good looks and sometimes, they get higher pay or better positions from the get-go. It's great that they are good looking, don't get me wrong, but what we discussed is that they use their looks instead of their knowledge or intelligence; and in the end they hold positions that they can't afford, and then some people think that that position should not be held by a female.

Her advice: "Don't forget your personal values, respect yourself. Don't get intimidated, you can always contribute with your work, it doesn't matter if you're part of a minority, you can always make a difference. And keep learning, all the time."

Due to our busy agenda that day, we couldn't talk personally with Roberta Carraro, graphic designer working at Heroku. But we managed to make a skype call with her.

Roberta works closely with developers and engineers, and also she works to improve the User Experience on the site.

She told us that being a designer and front-end developer in San Francisco is very challenging because there's a lot of people doing graphic design and web development, and you have to keep updated yourself in order to outstand and not fall behind with all the new technologies.

Roberta's advice: "Don't be afraid. Don't worry about what people think about you. Believe that you belong and you'll belong."

After a long week, we had a blast meeting and talking to so many amazing women in tech companies. We saw some patterns regarding the struggles a female has to go through, but we also witnessed how many companies and awesome people are doing many things to change it. It's all very promising, but as a female, I think that these are
exciting times to live in. One can feel change is in the air.

With this second post, we conclude our small tribute to all the amazing women that inspire us to keep going everyday, and who work to bridge the gap between minorities and technology. Thank you ALL for your amazing work!

Ruby: What I Would Have Loved To Know When I First Knew It